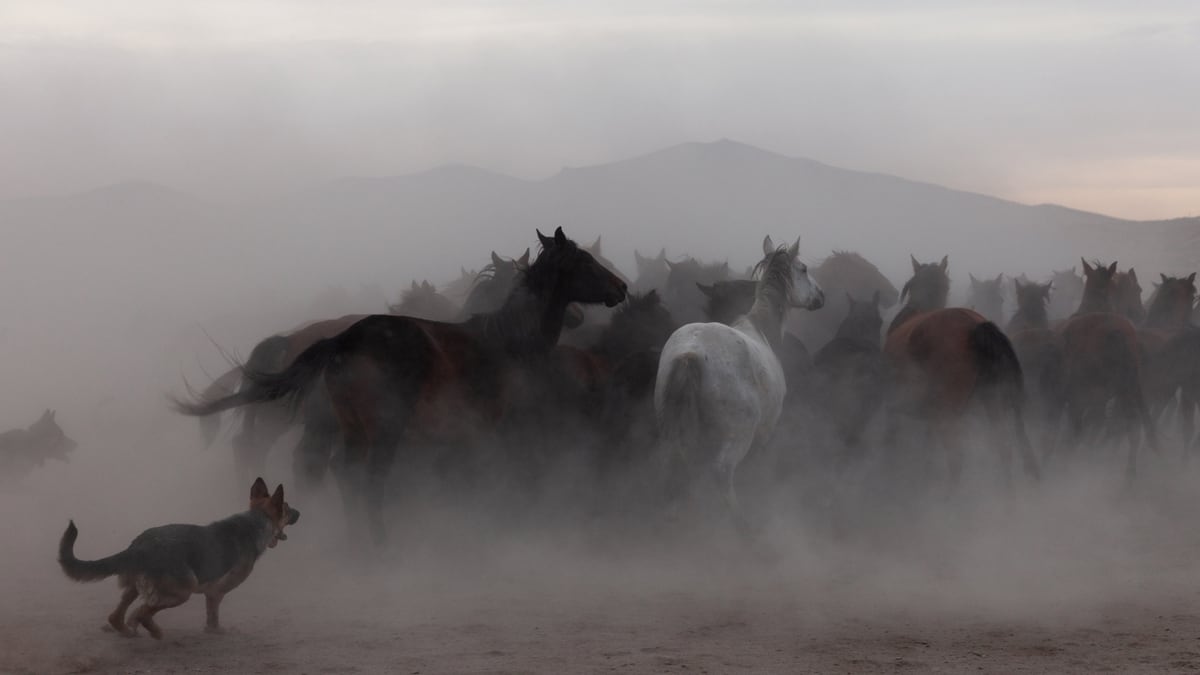 Herding dogs may be large or small, from the little Shetland Sheepdog ("Sheltie") to the big, bobtailed Old English Sheepdog. They must display the ability to keep other animals together, and this instinct is inborn.

Owners who keep herding breeds as family pets speak of the dogs trying to keep children or other pets in a small group! Herding dogs might be trained to herd animals as diverse as ducks, sheep, goats, and cattle.

Interestingly, it's the behavior of the predatory wolf that is honed and refined to produce the herding dog's distinctive actions. The herding dog goes into hunting-type behavior with the animals it is herding - it circles the group, identifies and retrieves stragglers (whereas a wolf would single out a straggler to attack and kill), nips at the animals' heels, and/or "stares them down."

What Breeds Are Herding Dogs?

The main dog breeds that are in the herding group are:

The Belgian Sheepdog is a highly trainable herder whose versatility and intelligence is the stuff of canine legend. The Belgian Shepherd is a breed of medium-sized herding dog from Belgium. While predominantly considered a single breed, it is bred in four distinct varieties based on coat type and colour; the long-haired ... Wikipedia

The Bouvier des Flandres is a herding dog breed originating in Flanders, Belgium. They were originally used for general farm work including cattle droving, sheep herding, and cart pulling, and nowadays as guard dogs and police dogs, as well as being kept as pets. Wikipedia

The Rough Collie is a long-coated dog breed of medium to large size that, in its original form, was a type of collie used and bred for herding sheep in Scotland. More recent breeding has focused on the Collie as a show dog, and also companion. Wikipedia

Despite its wolf-like appearance, the German Shepherd is a relatively modern breed of dog, with their origin dating to 1899. As a herding dog, German Shepherds are working dogs developed originally for herding sheep.

The Old English Sheepdog (OES) was developed as a drover’s companion that could work in the climate of the English countryside. His thick, double coat makes him instantly identifiable, and he is a loving, family pet that needs plenty of human attention. Here are ten interesting facts about this member of the Herding Group. AKC.org

No other breed can be mistaken for the Puli, a compact but powerful herder covered from head to tail with profuse, naturally occurring cords.

he Shetland Sheepdog, also known as the Sheltie, is an extremely intelligent, quick, and obedient herder from Scotland's remote and rugged Shetland Islands. Shelties bear a strong family resemblance to their bigger cousin, the Collie. AKC.org

Some of these animals are kept as pets, too.

Training herding dogs is an exacting task. While the breeds' instincts are there, trainers must refine and discipline these instincts to make the dogs into good herders. They usually begin with basic commands like any dog owner - sit, stay, heel, etc. But the herding dog trainer needs to make sure these commands are mastered, not optional.

Next, herding calls are added, such as "That'll do," and "Come by." "That'll do" is sort of like "at ease" - the dog is to stop performing the given command and return to the trainer. "Come by" tells the dog to turn clockwise.

When the dog is mature enough to handle these commands without hesitation or fear, the dog can slowly be introduced to the herd of animals. At first, the trainer uses a leash and a whistle to keep the dog in check. He or she trots along with the dog to show the dog the proper positions and directions. Gradually, the trainer will forego the leash and continue going with the dog. Then the trainer works toward giving the commands and standing by while the dog performs its herding duties.