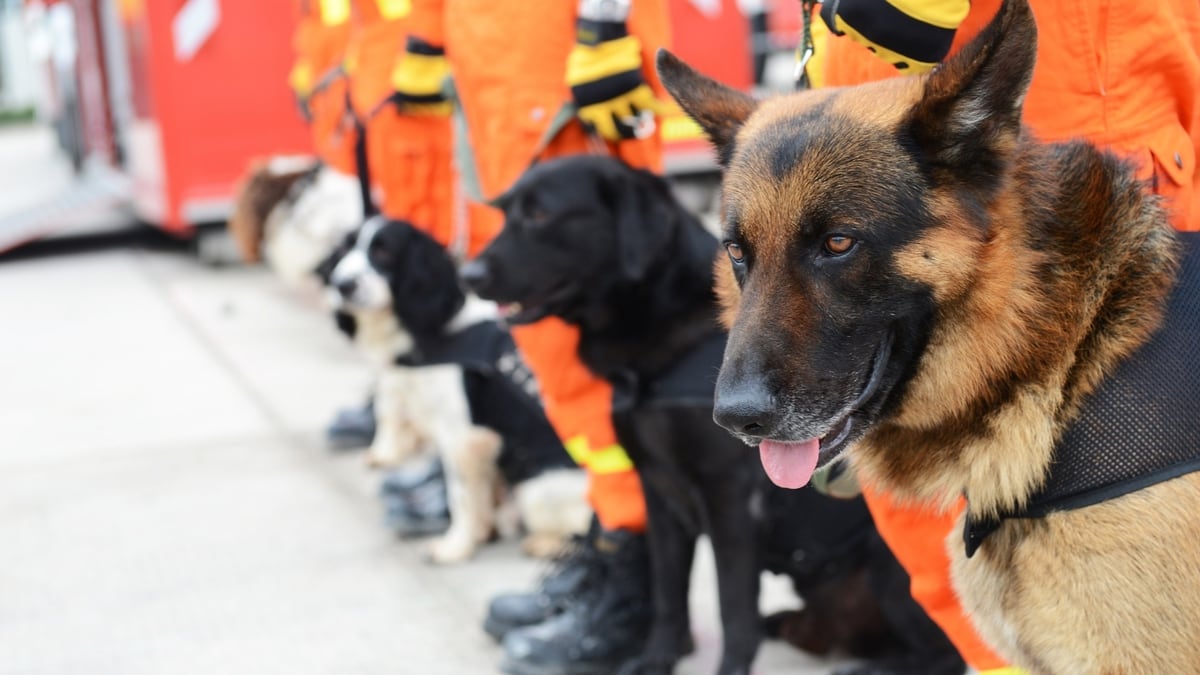 In medieval times, the famed St. Bernard was bred and trained by monks in the Alps to rescue avalanche victims and others trapped in the often treacherous snow. Sadly, the avalanche itself took the lives of many of the breeding stock, so other "blood" from other breeds had to be introduced to keep this famous rescue dog going. We may never know what these original St. Bernards were like, but when most of us think of rescue dogs, the St. Bernard with the barrel around his neck is what we think of first.

Rescue dogs go far beyond that these days. They are often called "Search and Rescue Dogs" to distinguish them from dogs that were rescued from bad conditions or from euthanasia. Labs, German Shepherds, Border Collies, mixed breeds, and others have all been trained as rescue dogs.

What Do They Do?

Rescue dogs do still work to detect and dig people out of avalanches and snow drifts. They can smell a person under many feet of snow, even if that person cannot be seen or heard.

In addition, search and rescue dogs can detect people buried under rubble after an earthquake or bombing. Rescue dogs were used in the 9/11 tragedy in 2001. These amazing canines are used to find missing persons, with some sniffing out trails and others "air scenting," or discerning the human scent from the air.

Rescue dogs are trained to lead their handlers to the place where they have detected the scent of the human they are searching for.

Humans, despite all their advanced tracking equipment, are still limited when it comes to detecting hidden human beings. Dogs are fast, accurate, and small enough to get into small spaces. Dogs can cover a lot of ground quickly, detecting details that would be impossible to discern from the air, for example.

German Shepherds and Belgian Shepherds are the typical "police dog" breed used in search and rescue, but not always. Remember the St. Bernard? These large animals are still used for search and rescue in the Alps, and Labradors have been used successfully as well. The Bloodhound has one of the keenest noses of all canines, and it has a place among the top sniffers among search and rescue dogs. (The name Bloodhound is a reference to the dog's amazing ability to smell blood in microscopic amounts).

Rescue dogs are trained by handlers who are themselves well trained. Handlers know how to connect with a dog and tap into its instincts. Once basic obedience training is mastered, young dogs are taken out "in the field" for simulated rescue attempts. Handlers set up scenarios where they simulate being buried, lost in the woods, drowning, and so forth. The dogs are taught how to handle these situations and are rewarded when they master their tasks.