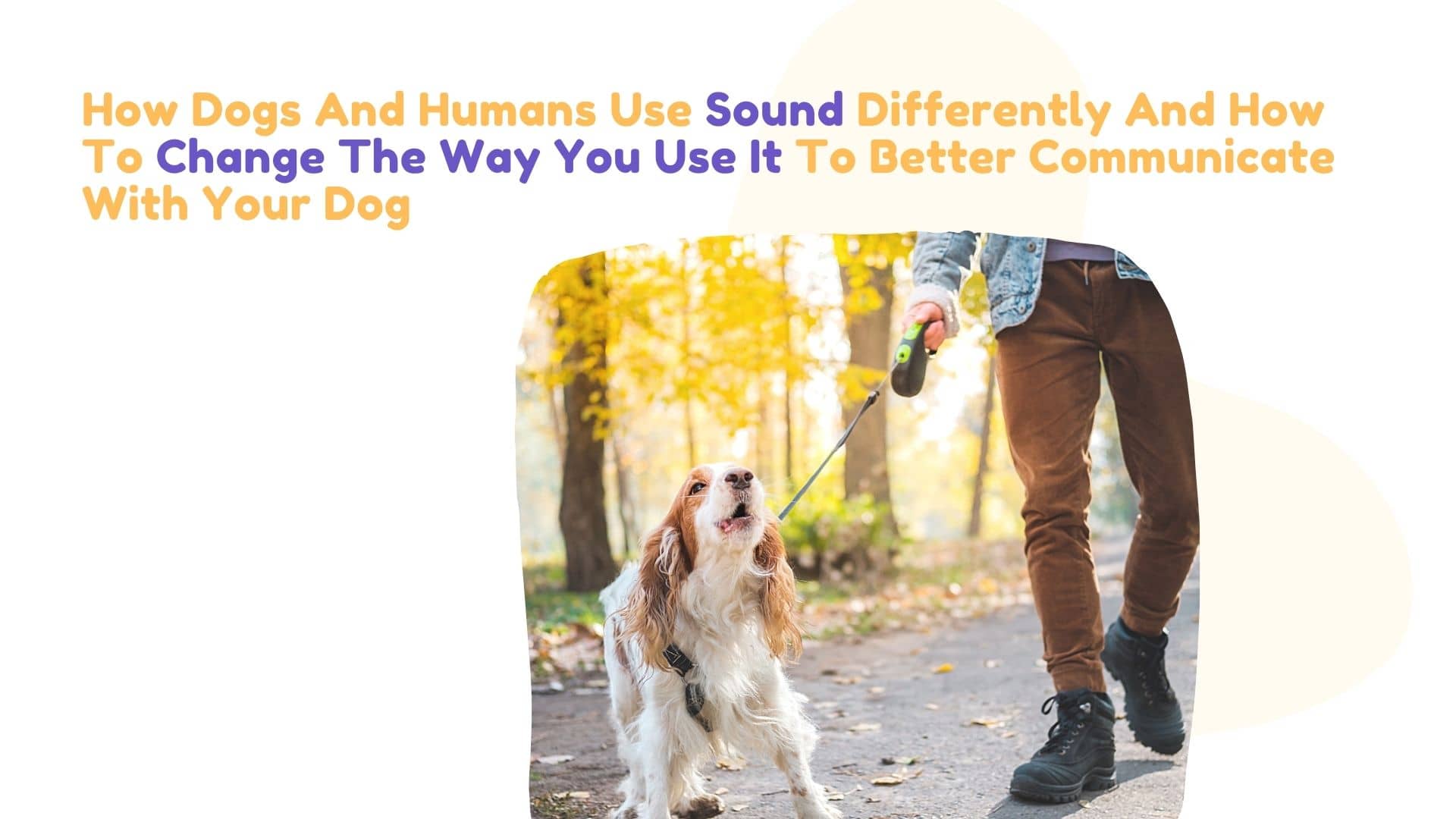 In the canine world, sounds are not what you think your dog thinks.

The sound you make, including the high and low pitches, affects how we can communicate with our small dogs. It is a challenge for every breed to interpret the words we say because they use another canine dictionary.

So, how can dogs and humans understand each other even though they sound differently? How can you change the way you talk to better communicate with your dog? Let us help you convey messages and understand your furry pal through sounds with visual signs.

How Dogs And Humans Use Sound Differently?

Dogs growl and bark, and humans talk. Speech differentiates people from dogs. We have a saying that "action speaks louder than words." For us humans, we think that speech is the most excellent form of language. But sometimes, we forget the power of body language when talking to our furry friends.

When you talk to your dog through your heart, do you already expect that it can read your thoughts without giving any actions? Communicating to canines through sounds doesn't work this way.

Dogs don't speak and understand English or any language in this world. Our pups are not mind-readers, and they don't sound the way you do. So what could be the reason when your dog doesn't respond to your command? It's because of the confusion.

Our furry pals can learn the meaning of many words. But it depends on how great and consistent you are at training. Plus, they have incredible hearing abilities. So, the sound is an excellent way to help canines get information about the world it lives in.

Dogs that are happy and well-trained can learn a lot from the sounds that people make. The challenge is, how can you do it? It leads us to our next question…

How To Use Sound To Better Communicate With Your Dog?

We can't stress enough the importance of visual signals to dogs. But accompanying sounds to your body language does the best communication training. No matter how fancy the word you use as a command, your dog will never understand you until training their brains. So, here are some simple ways to use sound for better dog and human communication.

Choose A Word For The Command, And Stick With It

One common problem that humans make is to say a command in a lot of ways. Some people would say "come here" in "come" or "come on." We have the nature of using synonyms to most words that we say. But this rich vocabulary is a curse for our furry friends.

They would not know that "come here" is the same as "come" or "come on." Unlike humans, dogs don't have the means to search the web or read a dictionary. So, it would probably stop or ignore you after hearing a "new" but synonymous command.

So, pick simple word commands and stick with them. Pay attention to the word that you use in which the dog responds well. You also have to be aware of how you say each word when talking to your pup. More importantly, there should be no command that has the same syllable or sound.

Mean The Sound That You Make

Translating the sounds that you make for your dog is tough. More often, you will get ignored than getting understood. As humans, we learn to pay attention to the clear sounds that we hear and ignore the repeating noises. You will sometimes feel this way, and so as your dog.

When the words coming out of your mouth make little to no sense for a pup, it will ignore you. So what do you want your dog to do after you say something? Once you think of it, find the right sound (word) and do the proper visual signal. Don’t forget to reward the dog after responding to your command.

When you say "down," do you mean to lie down or get off someone else's lap? Those are two different actions that require various commands. Make it easy for your dog to understand your command and not to test their IQ all the time.

Know When To Repeat A Command

Sometimes, the repeated commands can stimulate your dog's activity. If you want your dog to become more active, use short and repeated notes. It is also better to speak long and steady commands like "eeeeasy" when the canine is aggressive. But make sure that you say it in a calm tone. Otherwise, you can make your pup feel more agitated. Talking in long steady tones can calm you down as well.

Know When NOT To Repeat A Command

When training your canine in a normal environment, try to avoid repeating the command. When communicating a command such as “sit” or “down,” only say it once. It is because dogs would think that "sit" differs from "sit, sit, sit."

If you don't get the response that you want, pause a little and repeat it in a louder and clear voice. But keep a calm tone. Animals don't respond to the same level of noise as primates. An amplified noise can grab their attention, but you won't earn their respect. Pets become more panicked the louder you get.

Screaming At Your Dog Won't Help

Have you seen your dog that keeps on barking at your friend who visited your house? Then, you screamed "be quiet" or "shut up," but it didn't. First, know that canines have the instinct to join other dogs that are barking.

In other words, if you yell at them to be quiet as they bark, they might think you are joining their pack. So, they would keep on bellowing even louder. So, the best way is to stop shouting right back at your dog. Get their attention with a treat and say "enough." But don’t give the dog treat yet. Keep it within an inch of their nose and lure the pup away from barking.

It is not a simple command to teach since barking is an instinct of dogs, like laughing and yelling at humans. So be patient and practice at least five to ten times a week. There's no better joy than stopping your dog from barking at the wrong tree.

Separate Your Emotions When You Speak With Your Dog

Use your voice as a picture of what you want your dog to do. Angry or not, always be calm. It is challenging since emotions always affect the way we speak. But if you want your pup to stay calm and follow your command, you need to feel the same with authority.

Low pitch signifies authority or confidence, while high pitch sounds mean excitement and immaturity. Know when is the perfect time to lower or increase your intonations. A continuous flat sound is less likely to get an animal's attention than a continuous pitch-change.

Our furry friends perceive the sounds that we make differently. You can use short and repeated sounds or words to stimulate activity in your dog. Long and continuous pitch sounds can soothe or slow down your pup. Finally, one short modulated note, like "hey," can stop a fast-moving canine.

Thank you! Your submission has been received!
Oops! Something went wrong while submitting the form.
Posted
March 24, 2021