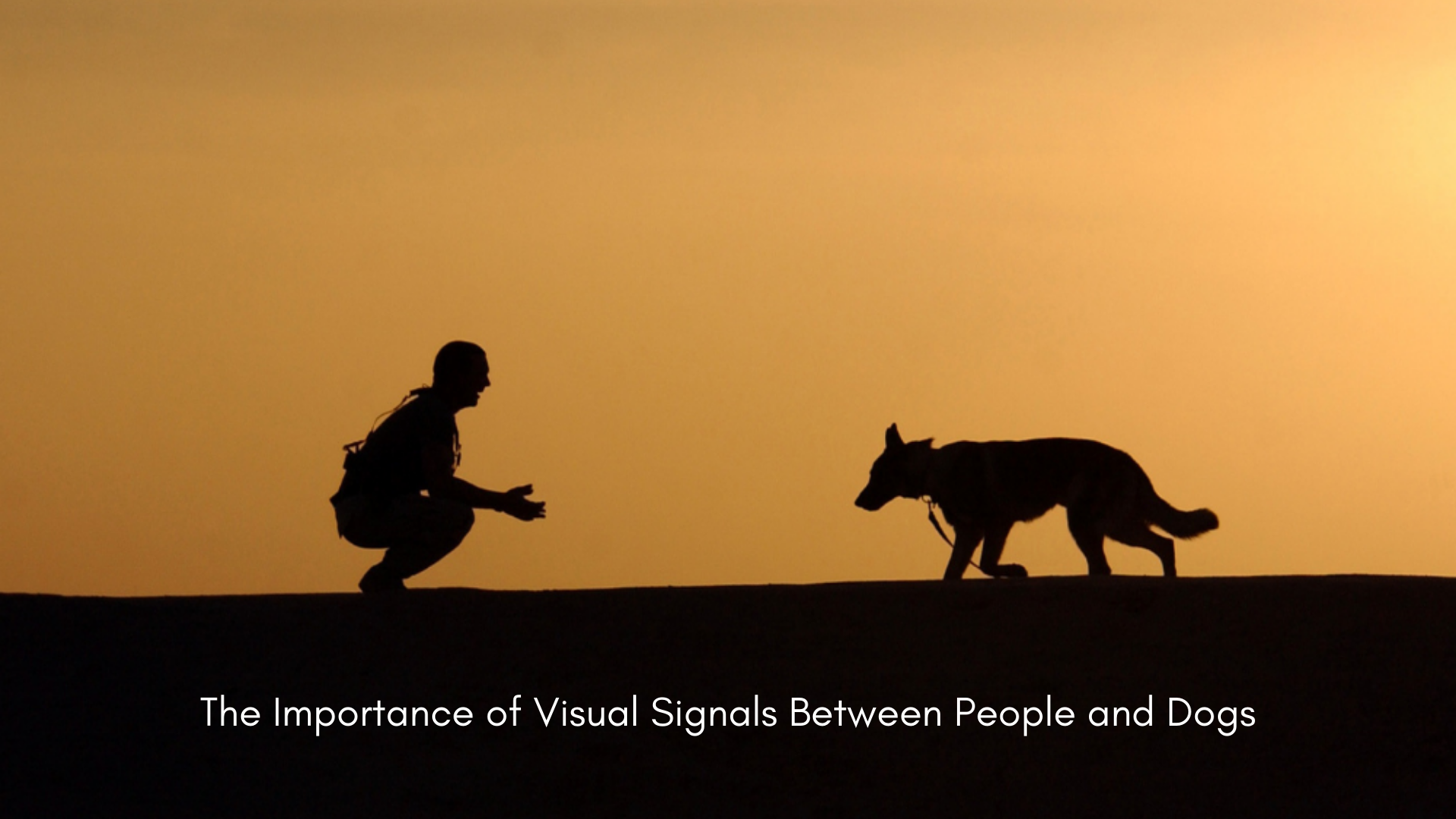 Most animals, especially dogs, communicate with people mostly through visual signals. It would help if you established this level of communication with your canines. Otherwise, they can become aggressive towards strangers and even you as the owner. In this article, let us have a more profound understanding of the importance of visual signals between people and dogs.

As a dog owner, you need to teach your furry pal some tricks to add to its arsenal. Dogs can sense our emotions through our words, but do you know what is a better way to train them? It's through visual signals. No matter how much we wish it could happen, our pets can't understand a word in everything that we say. Thus, it is where visual signals become essential in honing a well-behaved dog.

Do Dogs Respond To Visual Signals Given By Humans?

More often, dogs respond to hand signals given by humans. For puppies and stray dogs, it is their first way of understanding their owners and strangers. Note that even the tiniest movement that you make has significant effects on your dog's interpretation.

It is because dogs, regardless of the breed, are excellent in perceiving every change in our body language. Even if you don't mean moving your finger, the dog would assume that this motion has a meaning. So, what could it mean to them? It could either be threatening or enticing for them.

The slight movements can lead to profound changes in your dog's behavior. In under a second, it can go aggressive or defensive from being a sweet dog. Have you tried petting your dog on its head while sitting on the floor? Then, you suddenly move, and your dog starts running away from you.

An inch of leaning forward or backward can make the dog feel anxious, especially if it's its first time seeing you making that move. It is because canines have body movements to communicate with other dogs and humans.

Thus, they have the natural ability to watch the subtle visual signals and act based on their instinct. Dogs are more aware of the subtle movements that people make than we do. So, it is crucial that you also watch the way you move around your dogs. Pay attention to the way they move around you as well. It is because both you and your pup will constantly communicate with your bodies.

How To Use Visual Signals Between People and Dogs?

The only way visual signals between people and dogs would work is by understanding two things. First, you need to be aware of every movement you make when you're with your furry friend. Second, learn the behavior of your dog when it is around you. Let's take a deeper understanding of how to use visual signals in dog training.

Use Your Living Room As a Fieldwork

With less than a tenth of a second, dogs can do many actions. If it's your first time, focus on the specific actions that it does. In the meantime, you can ignore the other details of the movement for further observation.

You must be selective in observing the action of your pet. What does it do when you stamp your feet? What about if you close your hand? Does it have relaxed or heavy breathing? Is it leaning towards you or still standing square over all four paws?

Focusing on the primary action, which is usually on the face, helps train a well-behaved dog. Tail movements are essential but not as important as what is on its face. It's because you'll become more aware of what to do when around your dog. In short, you need to behave well if you want your dog to do the same.

Practice Visual Signals With Your Dog

Practicing is also crucial to your success in teaching visual signs for dogs. Despite knowing what signal you are sending, your dog might interpret it differently. It is why you need to experiment and see its reaction to different signals.

Watching and writing what you see is an excellent way to learn the behavior of your dog. It's because there are a lot of things that your dog can do within one second. So, the brain can understand better until you translate what you see into words or pictures.

Focus on which way the body leans and write it down, but pay attention to one body part at a time. Otherwise, your brain may get swamped, and you can't focus on any specific action.

Videotaping is another way so that you can play in slow motion and rewind the actions. This way, you can see the changes that happen so fast that other ordinary people can't notice. Thus, you can respond more quickly and more appropriately to your dog.

Beware Of Your Movement

Pay attention to every sign you give your dog, no matter even if you mean it to be that way or not. You can do several hand signals and even verbal commands and see how your canine would react.

Learn to identify your dog's key to a specific action or body language when you experiment with various actions. After becoming aware of your actions, you're halfway to what is essential to prepare your dog for your movements.

Unlike humans, direct head-on approaches can threaten dogs. For example, some dogs can become aggressive or uncomfortable with strangers. Know that not all dogs want to get petted on the head.

Eye to eye contact with humans is a standard way of greeting. But it is not the same in dog society unless you've been living with that dog. So how can you do it the right way?

Next time you want to greet a dog, stop a few feet away. Then, stand sideways rather than straight on. Avoid looking directly into its eyes. See if the dog will come to you. If not, it only means that the canine is not in the mood for petting.

But if the dog approaches you with a relaxed body, let it sniff your hand. Level it below its head. Pet the dog on the chest or under his chin. What about hugging?

Some trained breeds can tolerate hugging. Dogs can take embracing if you are not strangers to one another. It is because they will put up all kinds of funny acts to get your attention.

How Do Dogs Communicate?

Dogs may not talk like humans, but they express their emotions through canine body language and barking. They can also convey their message through auditory and olfactory communication or what we refer to as vocalizations and body odors. In short, dogs can communicate in many ways.

Once they do a particular body language, you need to pay attention to the dog's reaction. A simple wagging of its tail could mean joy or a movement of their ears could mean fear. Within a second, your dog could do a lot of body language. So, try to focus first on a specific area, primarily its face.

But be careful not to look directly into its eyes because it could mean danger, especially for stray and aggressive breeds.

Now that you know the importance of visual signals between people and dogs try to apply them with your pup. Know the behavior of your canine and how it would behave under certain circumstances. Then, train them right if you see wrong actions. Positive dog training is the only way to teach your furry pal.

Thank you! Your submission has been received!
Oops! Something went wrong while submitting the form.
Posted
March 26, 2021