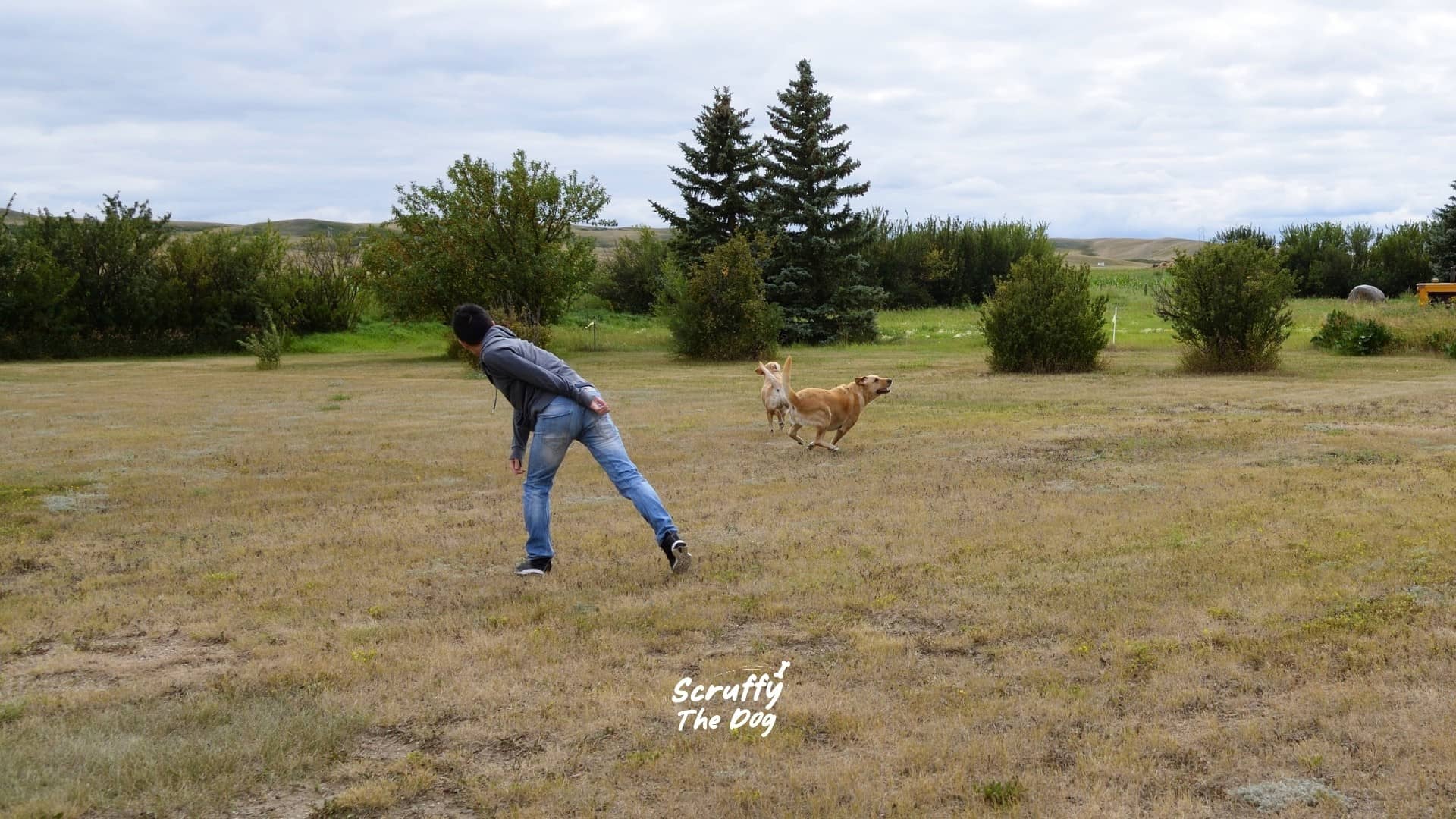 People and canines have a thing in common; we both love to play. Our eternal youth is almost the same with our furry pals. So why do dogs and humans play like kids their entire lives? It's what we're going to answer in this article.

Dogs enjoy playing by themselves, with a ball, and with other people as much as we do. They are one of the happiest species in the world. But sometimes, a fun time can lead to injuries and pain. Besides understanding why dogs and humans play like kids, ensure that play with your dogs is as safe as it is fun.

Why Do Dogs And Humans Play Like Kids All Our Lives?

Playing never stops, even when we get older. There are a lot of fun plays with dogs both indoors and outdoors. Adults use it to have some fun or escape the reality of a stressful life. Some will play because they feel bored and want to kill time. Dogs also love to run, fetch and sometimes wrestle for the same reasons.

The Science Behind Eternal Youth On People and Dogs

In the animal kingdom, mammals get a lesser interest in playing as they age. But it is not the case for dogs. Even aging canines can have a high level of interest in playing. Our furry companions are the most playful animals. Like humans, they carry this trait even in adulthood. But is there an explanation for it?

According to Patricia McConnell, Ph.D., an animal behaviorist, scientists consider humans as "paedomorphic." It refers to adult canines that kept juvenile characteristics even at sexual maturity. These are the characteristics that usually fade away as an animal matures. Thus, dogs have delayed developmental processes for so long that they never grow up.

In McConnell's book entitled "The Other End Of The Leash," she mentioned that paedomorphism is like the evolution of mammals into their adult form. But the animal retains looking or acting juveniles or young. This developmental process can answer why and how dogs can differ from their wolf ancestors but remain the same species.

The selection of juvenile characteristics can be because of two reasons. As explained by Dr. McConnell, it could be because of artificial or natural selection. First, dogs could have evolved from being wolves through the artificial method made by people. Humans selectively kept and bred the most docile wolves until people could control their obedience.

On the other hand, wolves develop through the natural method. It was when people outnumbered the wolves, and distances in between them got shorter. Thus, the wolves began gathering around human settlements to scavenge on their garbage.

High Level Of Creativity in Dogs

Humans have a lot of creativity. We can turn every invention into a new toy. For example, people turned the old-fashioned high-data processing computer machines into computer games. Dogs may not know how to use a computer, but they have many ways of turning everything that they see into a new toy.

Even the dirtiest rug or a pair of old slippers can be a toy for our furry friends. Our pup can enjoy the littlest of things and still wonder. Like humans, canines also have natural characteristics to enjoy new things and new ways. We are both open and enjoy interacting with the environment because of our creativity.

The Environment Plays A Role

If humans love to play even when they get older, it is possible that they can influence their furry companions as well. Two different species can share the same passion over a thing if they have lived for a long time.

The genetic blueprint can also provide a foundation for building a better environment for you and your pup. Thus, the environment where the dog lives and how you raise it is crucial for development.

The way how you grow up affects the way you play. If you have been playing rough or fear other objects, then you can carry them as you age. It is the same for dogs. For example, chained dogs are afraid to play ball or any object because they feel terrified.

Almost all pups raised in deprived environments show little interest in playing with any toys. It differs from a dog's disinterest over toys because it was never a natural retriever in its DNA. If you want to feel young and your pup for the rest of your lives, play ball or running sometimes.

Canines, as four-legged animals, enjoy chasing and tagging with other breeds. It is a bonus that they get to play it with their owners, and sometimes with a ball. The problem is that dogs and humans may have different rules.

Have you seen two dogs running back and forth as if they are trying to chase each other? Don't get surprised if you see one, because it is how canines often play. Someone has to chase somebody - it is the rule that almost every species shares. The dog can chase an object, another breed, or you.

If you want to play tagging with your furry friend, then decide who chases whom. You can start a chasing game by walking away from the dog while clapping and smooching. It is like you are saying, "come, I want to get chased."

It helps to understand that both you and your dogs may have different rules. Canines also try to teach you how to play their games while trying to teach them yours.

What do you do when you see a ball or someone throw it at you? Our first instinct is to dribble, throw it as if playing basketball or roll it on our hands. It is the same thought that our dogs probably have but in different ways.

You can start teaching your pup how to play ball. According to Dr. McConnell, begin with throwing the ball only a short distance away. Most people throw the ball far too long, which is wrong. The dog does not know what is happening, so it may lose interest.

After you throw the ball, wait until the dog comes and put it in its mouth. Once it does, move away from the ball while clapping and smooching to attract him in your direction. Keep on doing it until your pup comes back at you. Remember, two to three throws are enough.

What if dogs don't want to return the ball? First, know that fidos also enjoy winning an object. If they get it, they will keep it away from others who want the ball as well. So, don't push your pup to give it back or get angry.

Let the dog know it is okay to hand over the ball and that it doesn't mean losing. Then throw the ball in an instant when it gives up. Try to resist teasing and saying, "Aha! I've got the ball," because it won't help. As long as you know how to do it, you can train a dog to bring the ball back to you.

Dogs Are Into Play Fights

When you were little, you probably played tumbles and mini wrestling with other kids. As you get older, you also get to enjoy watching rough-and-tumble with wrestlers or boxers. Dogs love these actions, too! But play fights for dogs are usually between individuals of the same age, sex, and physical ability. It is more dangerous as well.

The problem with it is that one could get hurt, especially between dogs and humans. We grab by hand, but dogs do it by mouth. So imagine if it caught you, a mouth full of sharp blades can slash through your skin.

Tiny play fights can open up your forearm or cheek, and, at worst, it could happen to children as well. This game is dangerous because dogs may lose control and temper. Trouble sometimes comes from something the dog considers appropriate discipline. So, it's best if you leave this play between animals.

Playing is, somehow, our way of making our spirits feel good. It coordinates and exercises our bodies and minds. Even psychologists advise humans to put more childlike play into our lives. But if you want to do it with your pup, play the right way to avoid lack of interest and injuries.